One of top five priorities of my platform is to Activate Calgarians. I want to give you the tools you need to spearhead meaningful change in your community, and I want to repair the disconnect we feel between City Hall and us as residents. Let’s make progress simple and more attainable.

Calgarians are right to be frustrated when they have to use an impersonal service to deal with personal needs. I’m going to change that. I'm going to empower Calgarians through local Community Associations, encourage and facilitate volunteer opportunities, provide funding for community initiatives, modify redundant by-laws and invest better resources into 311 so you can get the answers you need faster.

We shouldn’t have to rely on The City of Calgary to solve every problem that we can easily work out ourselves. That’s not efficient. That is not activating Calgarians. Often we hear, “that’s just the way things are,” and this is something we need to challenge. We should be afforded the ability to be a part of our own solutions. We can’t afford to wait for a system that is already overloaded, overworked, and spread dangerously thin. Lack of transparency, overspending, tax hikes, inconsistent regulations, financial scandals, or and infighting between City Business Units have caused undue uncertainty and frustration. Solutions can be simple, attainable, and expedient.

As I have laid out in my Value for Tax blog, Calgary is still finding its new equilibrium after our economic downturn caused by the drop in oil prices and the ongoing pandemic. The City of Calgary is a service organization that seeks to run like a business. This is an admirable and important aim but The City is more than just a goods and services provider. Calgarians are more than just consumers of these goods and services. We are ALL in this together anad Calgary needs to rethink how it empowers local Calgarians. Bureaucratic hurdles and roadblocks need to be relaxed, not tightened.

It is time to activate Calgarians to be part of the build-back strategy, with Ward 12 leading the way to demonstrate what is possible! 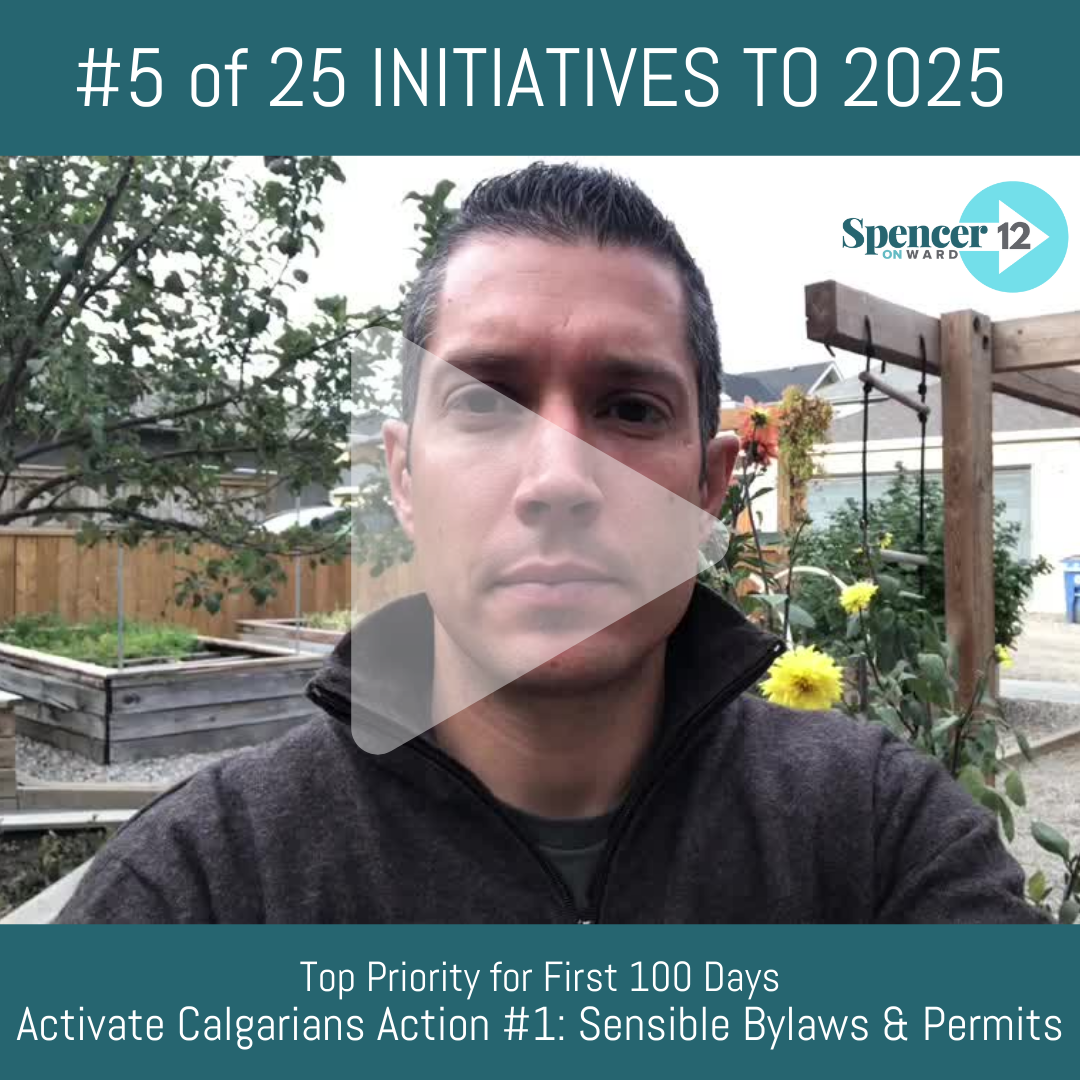 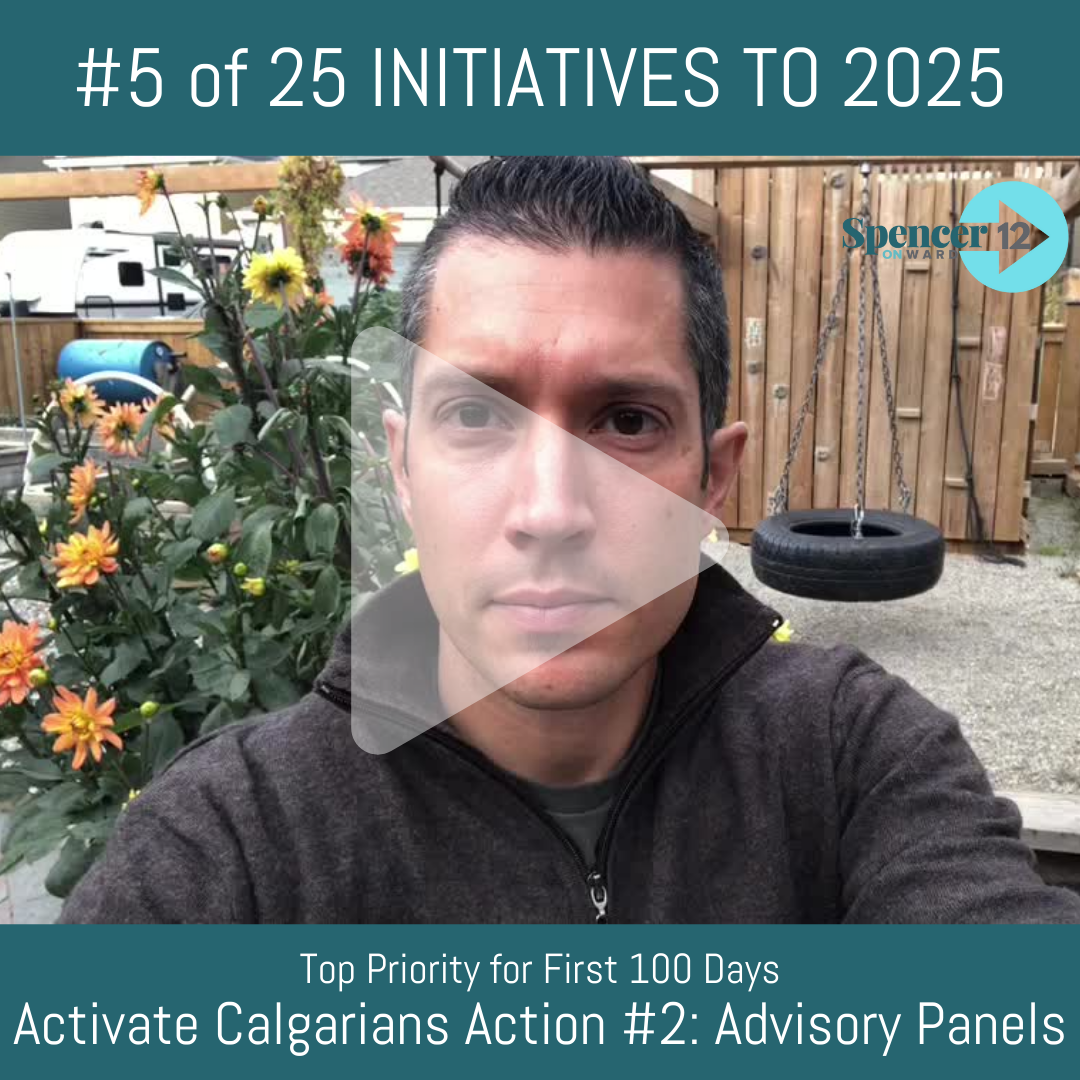 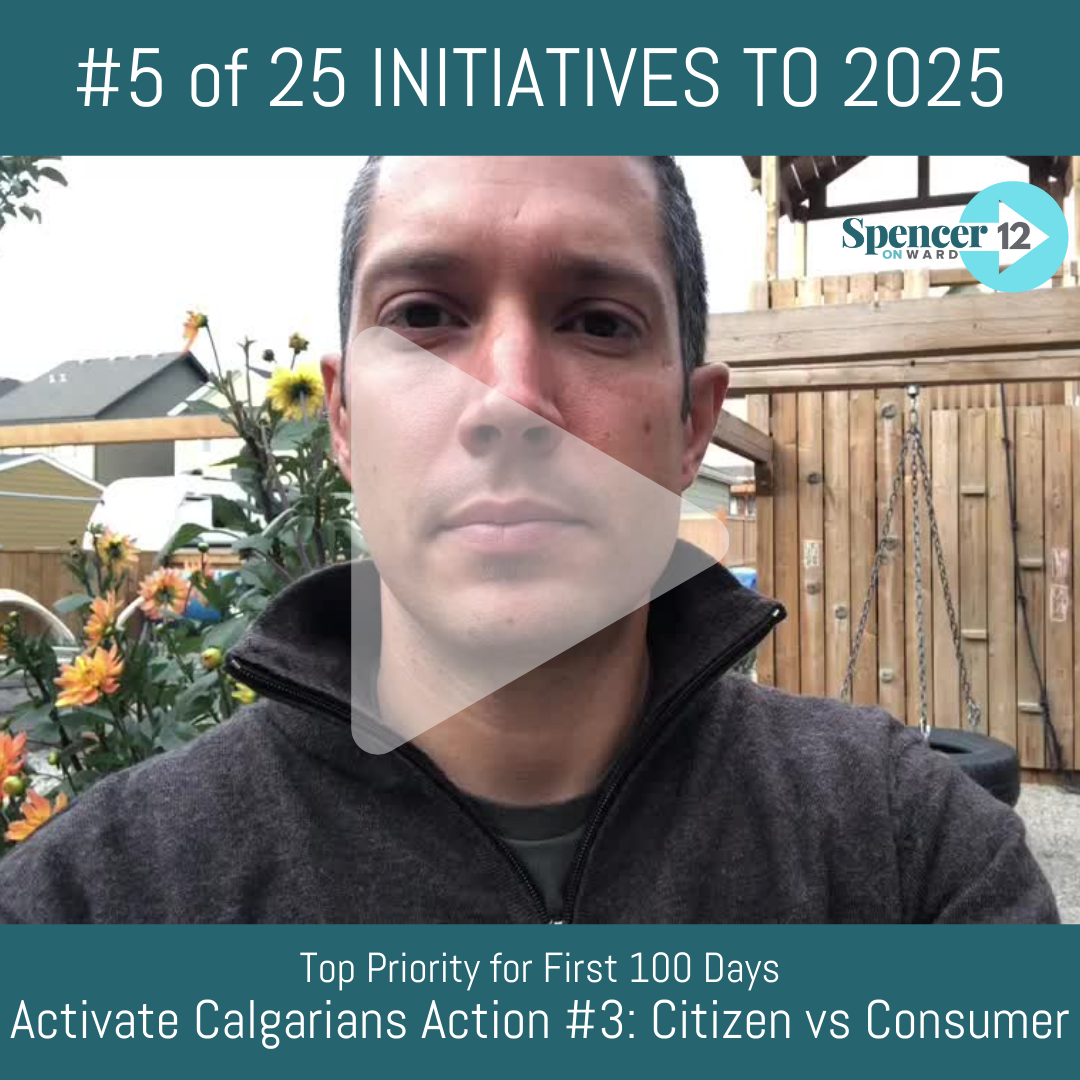 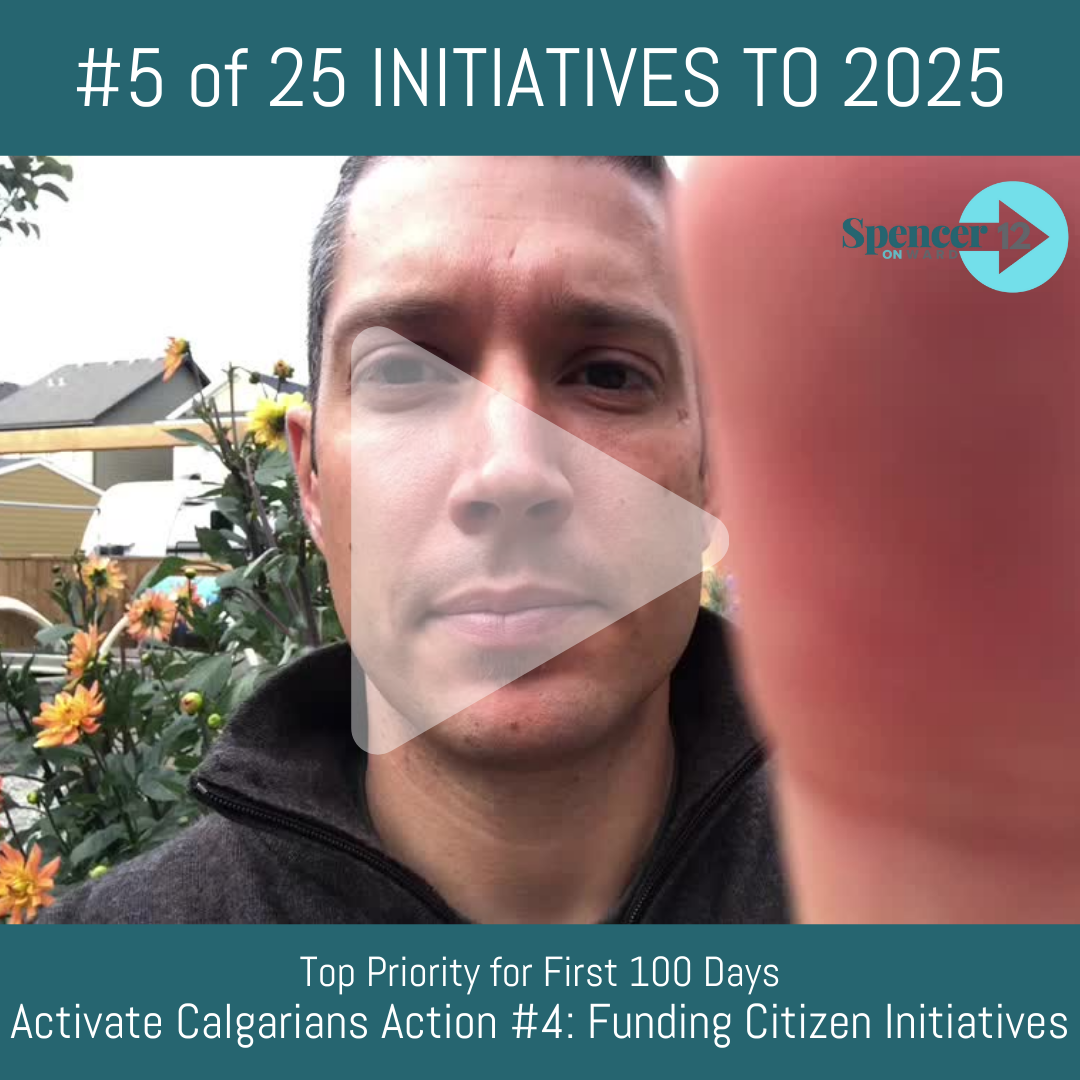 We can make an immediate impact on the ability of residents to care for their neighbourhoods by changing some of our bylaws. Currently our Urban Canopy, Snow Removal, Parks & Green Spaces are almost exclusively the purview of The City and occasionally shared in conjunction with businesses and associations in signed agreements.

The time to rethink this is right now when resources are thin. We can activate people by providing simple training and empower them to take care of spaces/issues in their neighbourhoods that are important to them. The legalities and liabilities to be addressed by indemnity waivers and grassroots empowerment.

Did you know that if you want to pop up a tent for a market you have the Fire Department come to inspect and a City electrician to inspect your extension cords? You also need to pay them overtime if they come on a weekend and each time you set up. Hurdles such as these have relegated many neighbourhood activities and business opportunities to paid professionals in our highly risk-averse City.

Immediately after the election, I would be setting up four (4) Resident Advisory Panels (RAP) to host the most engaged and knowledgeable voices of Ward 12 and carry their feedback and expertise into decision making. The process of forming these panels and how often they met will change based on the conversations and the decisions facing us at City Hall.

A citizen is someone that participates in our democracy and is actively engaged in giving their gifts to those around them in service of a better tomorrow. A consumer is someone that has surrendered to others the power to create what is essential for our own well-being.

We need a healthy and vibrant economy and we need services from The City to thrive but our governance, even at the most local level, cannot provide all that we need. Losing sight of this stokes the antagonisms in our world and turns neighbours against each other as they fight to see their preferred political hopes for the future in charge of our shared resources.

It might be fair to say that our overall confidence in the systems and leaders that are governing us are an all time low. The pressures of COVID and the health orders, economic uncertainty and the ability for leadership to seemingly get away with almost anything has many feeling infuriated at worst and apathetic at best.

While changing these things seem impossible there is much that is well within our control. We have the power to create resilience right on our own blocks and in our neighbourhoods and business districts.

I commit to sharing the stories of our amazing citizens in Ward 12 that are making things better while diligently drawing out the best of the people and businesses of Ward 12. I will partner with citizens to address roadblocks and help others see the potential of their neighbours and neighbourhood.

This video played a key role in shaping this political imagination: Rabbi Sacks on The Politics of Hope

One of the best ways to activate Calgarians and reset the relationship is by empowering the volunteer spirit of Calgary. There are so many different ways to catalyze citizen action by making small incremental investments. I commit to advocating for more funding for our local neighbourhood and business leadership across Ward 12 and the City of Calgary.

I have watched the power of this in my own neighbourhood as a small budget was put aside for existing and would be volunteers. Residents willing to do some work to organize events, projects and initiatives were invited to an annual planning meeting to pitch their ideas and plans. Local leadership would then accept proposals or send them back for more work and I watched this simple process and a small pool of resources activate many of my neighbours. They were activated and became full participants in making their neighbourhood better and addressed concerns with creativity.

It was this invitation to civic participation that activated me. How many more Calgarians have had a similar journey/experience due to our robust network of Community Associations, Residents Associations, and Business Improvement Areas?

Unfortunately many of our local associations are under the weight of unreasonable expectations as property managers of the $1 Billion in ailing community infrastructure across The City. This is actively squelching creativity and disincentivizing participation for many would-be volunteers. It is time to relieve this burden and properly empower people where they live.

Granting with public money is a particularly powerful tool to nurture creativity and activate the best ideas amongst us. The problem is it is a process that quickly becomes laden with bureaucracy when the granting is abused. When the focus is on small and local ideas you remove much of the risk and also increase access many fold.

The small and the grassroots is often the first to be defunded or left behind when a City is reeling in tight economic times but it is often the most cost effective and powerful way to give people a sense of belonging and ownership where they live. We cannot afford to let the powerful volunteer spirit of Calgary go unnurtured or supported. In fact, when we are talking about stretching dollars it needs to be prioritized as it activates resources that would otherwise lay dormant.